It might take a decade, but electric heavy-duty trucks will become more predominant on highways, according to Craig Van Batenburg, CEO, ACDC, who addressed attendees of the HD Repair Forum in Fort Worth, Texas, yesterday.

“This evolution is happening and it’s going to happen fast,” he says.

The motivating factors behind electrics trucks include a reduction in brake wear, no filter changes other than the HVAC filter, no need for oil or transmission fluid changes, the cost of batteries has dropped 80 percent in nine years and the obvious money saved on fuel.

Furthermore, servicing the trucks will be simpler. “It’s going to be a lot easier for a repair technician to work on a pure electric truck than a diesel by a factor of 10. They’re going to absolutely love it whether they realize it [now] or not,” Van Batenburg says.

All of this isn’t to say there aren’t current downsides, such as initial cost to buy, uncertainty of new technology, battery charge time, range, early lack of acceptance by technicians and the cost of some parts – one of which will be the batteries.

Another caveat is how a pure electric truck will affect shop layout. “The one thing you need to know is when the battery packs come out, they’re heavy. My guess is they’ll be 2,000 lb. each and there will be multiple packs. If you’re doing work, these have to come out. You need to consider the layout of your shop because where are you going to put them?” Van Batenburg says.

“Can we make a business case to go to electric? The bean counters will let us know and when they say yes, we’re there. Period. Right now, we’re close,” says Van Batenburg. “There are still barriers to adoption. I’ll be the first to admit it.”

Adoption can take a long time. It’s going to happen, but it’s just a matter of how long before the industry gets there, he says, pointing to the slow but increasing adoption of the Toyota Prius as an example.

That said, Van Batenburg adds, “I can easily say that in 10 years, long-haul, pure electric trucks will be out there, and I think people will say this is a good deal because we’re making money and we’re saving some money.” 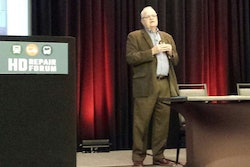 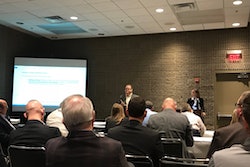 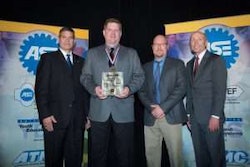