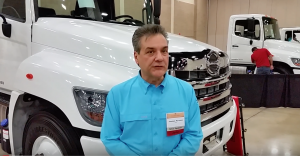 You’ve got three problems with a truck and only 45 minutes to fix them all.

But what if it only takes you 17 minutes and 42 seconds?

Tom Marchini, senior manager of training at Hino, said Brain nailed that time while working on a medium-duty Hino 268. It’s the best time that Marchini has seen in the nine years that he’s been assisting at the annual Rush Truck Centers Tech Skills Rodeo. Brain is listed as a Hino finalist along with Billy Stanley from the Rush Truck Center in Houston. (See the list below for other finalists.)

“I have noticed that the more experienced guys are really getting fast at diagnosing problems on the truck because they’ve got more time on the Hino product and the way we can make the truck fail is kind of in a little bit of a box now,” Marchini said. “So, they’re getting a little smarter and we’re having a harder time challenging them.”

Though it’s doubtful that Marchini will see a better time than that this week, technicians, regardless of their completion time, will have a chance later to meet with Hino service reps to discuss their work on the truck.

“I would say over time they are definitely improving,” Marchini said.

Hear the rest of Marchini’s comments in the video below.

Note: This story has been updated from an earlier version.