Following the launch of North American production of the Tre battery-electric vehicle (BEV), Nikola plans to introduce a FCEV variant of the Nikola Tre Cabover, and the long-range Nikola Two FCEV Sleeper it says is targeting best-in-class efficiency for ranges between 300-900 miles in the North American market.

“To expedite the transition to a carbon-free future, the trucking industry needs heavy-duty, zero-emission commercial vehicles engineered to match the weight and range capabilities of today’s diesel trucks," says Jason Roycht, Nikola's global head of FCEV. "Nikola is excited to introduce additional detail about our portfolio of FCEV trucks and our continued commitment to sustainable commercial transportation."

Nikola says its portfolio will include trucks for the entire spectrum of commercial freight:

The Nikola Tre FCEV Cabover is targeted for distances up to 500 miles, the company says, and is expected to address the majority of the North American regional market, especially use cases where additional freight hauling capacity and quick fueling are required by fleet operators. The company adds the Tre FCEV will leverage the Tre BEV platform with hydrogen fuel-cell power, while being designed to improve aerodynamics and reduce total vehicle weight.

The first Tre FCEV prototype builds are scheduled to begin in Arizona and Ulm, Germany in Q2 2021, with testing and validation of the vehicles continuing into 2022, and production commencing planned for the second half of 2023.

The Nikola Two FCEV Sleeper will be a long-haul freight solution with hydrogen capacity allowing a non-stop range of up to 900 miles. Nikola says its Two FCEV leverages the weight advantage of hydrogen in long-range, long-haul zero-emission commercial transportation. The Two FCEV will be based on a new chassis custom designed for North American long-haul routes and is anticipated to launch in late 2024, the company says.

The Nikola Tre and Nikola Two FCEVs are expected to use multiple common fuel-cell power modules and scalable hydrogen storage systems.  Nikola says both systems are currently in development and testing with industry leaders in collaboration with Nikola Engineering. The first Tre prototypes utilizing these systems are expected to begin road testing in 2022, the company adds.

“Our plan is to enter the market in steps,” says Roycht. “We are building on the current Tre platform with the planned launch of our fuel-cell and hydrogen storage systems in 2023. These systems are designed to be scalable in order to handle the greater power and longer-range requirements for long-haul, which allows for concurrent integration into the chassis design of the Nikola Two FCEV Sleeper.

"Utilizing common components and systems for hydrogen propulsion will support greater economies of scale and also allow Nikola to continuously expand and adapt our FCEV truck portfolio to address the diverse requirements of commercial trucking.” 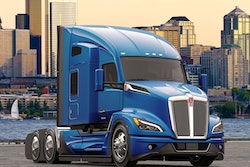 Kenworth launches T680 Next Gen, its most aerodynamic truck to date 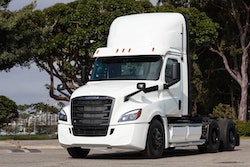 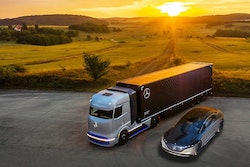 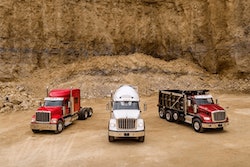