Bracing for winter’s impact: Tips for winterizing customers’ equipment for the weather ahead

The following comes from the November 2016 issue of Truck Parts & Service. To read a digital version of the magazine, please click the image below. 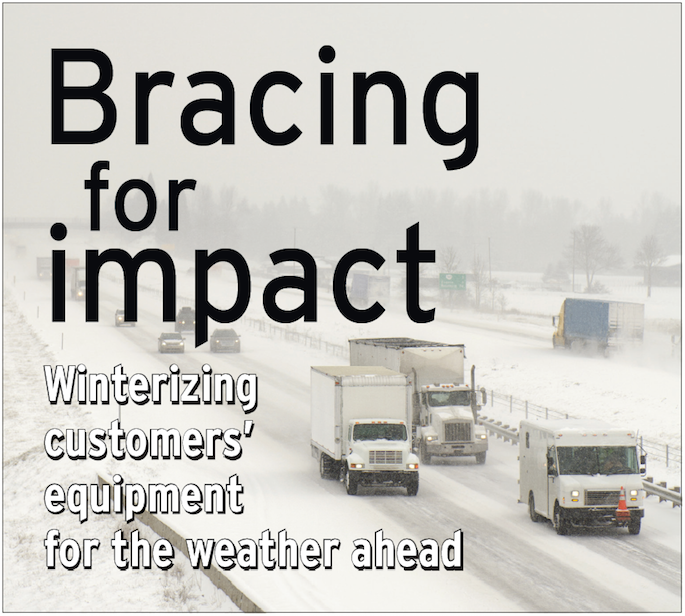 As days get shorter and nights get colder, fleets and owner-operators throughout North America are once again turning their attention toward winter.

Service providers should be doing the same.

Any service provider offering a winterization package of their own would be advised to include inspection points for the following parts and systems:

Tires are at risk during all weather extremes. Oppressive summer heat drives air pressure up while chilly winter weather does the opposite, driving tire pressure down and causing under inflation. Gary Clark, market manager at GCR Tires & Service, says under-inflated tires greatly increase the likelihood of a failure that leads a customer “to being parked on the side of the road.”

Clark says to never reinflate a truck tire that has been run at very low inflation pressure (80 percent or less of normal operating pressure) without a complete inspection of the entire tire. Immediately have the tire demounted and inspected by a qualified tire service professional to determine the cause for the air loss and usability.

“Tires lose up to 2 PSI for every 10°F of change in temperature,” adds John Carpenter, field service manager for Toyo Tire Canada. “A 5 PSI loss is enough to sacrifice handling, traction and durability.”

In regions where snow and ice are especially common, GCR Store Manager Matt Ellis says siping — a process where tiny incisions are made into the tread of a tire to expose more rubber to the road — also can provide additional traction and improve vehicle control.

Heavy-duty truck wheels are manufactured with metals that are vulnerable to corrosion. And with a growing subsection of municipalities turning to extremely aggressive road salts and de-icers to keep roads clean in the winter, wheels are increasingly coming under attack.

Winterization inspections should allow time for examining and cleaning all wheels to remove rust and identify corrosion. Any wheel (or wheel attaching part) displaying corrosion that has begun to weaken the integrity of the unit should be immediately replaced.

As bad as road salts are on wheels, brakes have it even worse. Coated by abrasive road chemicals thrown upward by tires while in motion, brakes and other under carriage parts are equally susceptible to degradation from corrosion and lack the premium exterior position to be easily cleaned.

The phenomenon of rust jacking (where corrosive chemicals seep into a brake system between a pad and shoe table and over time push the two units apart, weakening brake performance) is almost exclusively the result of these events.

And that’s just from winter moisture. When temperatures drop below freezing things get even worse.

“I’d bet the majority of our [winter] service calls are due to locked up brakes,” says Ellis, referring to brakes that get covered with snow and road chemicals then corrode, freeze, and become inoperable. Full brake replacements during a winter PM will limit, but not eliminate, the risks for both problems. 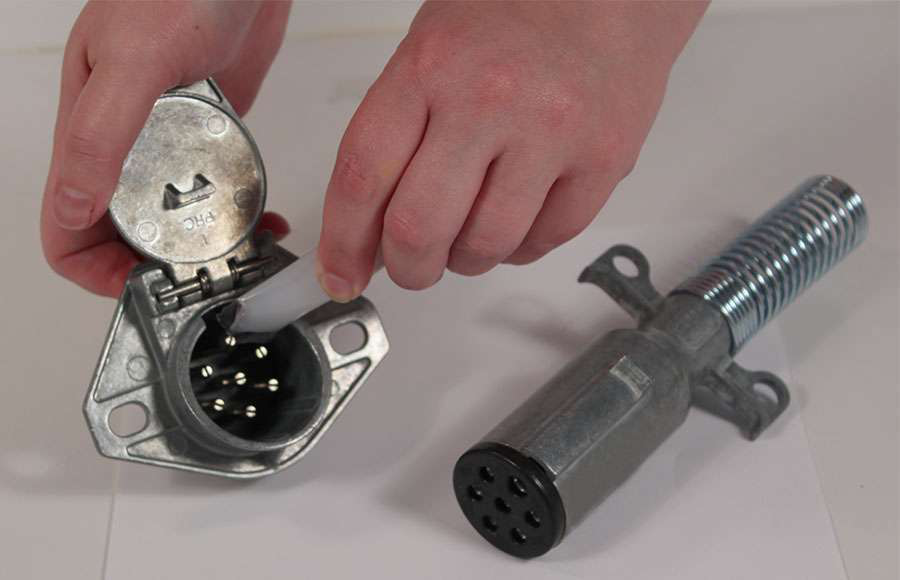 Adding dialectic grease to all connectors is the best defense against moisture and corrosive chemicals that can destroy electrical systems.

Fighting corrosion is the No. 1 priority for electrical systems in the winter as well, says Tom Begin, director of innovation and emerging technology at Phillips Industries.

Similar to how tires throw moisture and chemicals at wheels and tires, electrical currents attract moisture to wires and lighting systems.

Begin says technicians performing winterization inspections should apply dialectic grease to all connections as a first line of defense against winter moisture and corrosive chemicals. He says checking for proper voltage levels across all electrical systems is another must-do. Once that is complete, all weakened systems should be inspected further to identify root causes, and any corrosion found should be removed and the wiring replaced.

Begin says wire splicing should be avoided as much as possible.

“We never recommend that you cut through your insulation,” he says. “Harnesses come in sections. They are designed that way for a reason. If you have to make a change, replace that section.”

Batteries also should be included during the electrical step of an inspection. Because most heavy-duty truck batteries are lead acid based, they are impacted by the ‘lead acid paradox,’ says Doyle Choate, U.S. director of heavy-duty aftermarket sales at Exide Technologies.

An additional concern of which to be aware is the danger of leaving batteries in a low state of charge. The process of discharging dilutes the acids within the battery and creates water, therefore becoming increasingly susceptible to freezing. Choate says technicians should measure a battery’s voltage and cold cranking amp (CCA) ability during all inspections, and should recharge or replace a battery when low readings are uncovered.

“I would say if a battery tests at lower than 12.35 volts the chances of regularly starting the truck are not good,” he says.

Diesel fuel has its own list of winter-related issues.

This has multiple effects, none of them good.

Fuel cleaners, conditioners and other treatments added to a fuel system during fueling or winterization inspections are the most common treatments to combat these risks. Kardon says these chemical treatments can be purchased for individual fuel fills and in bulk depending on customer preferences. 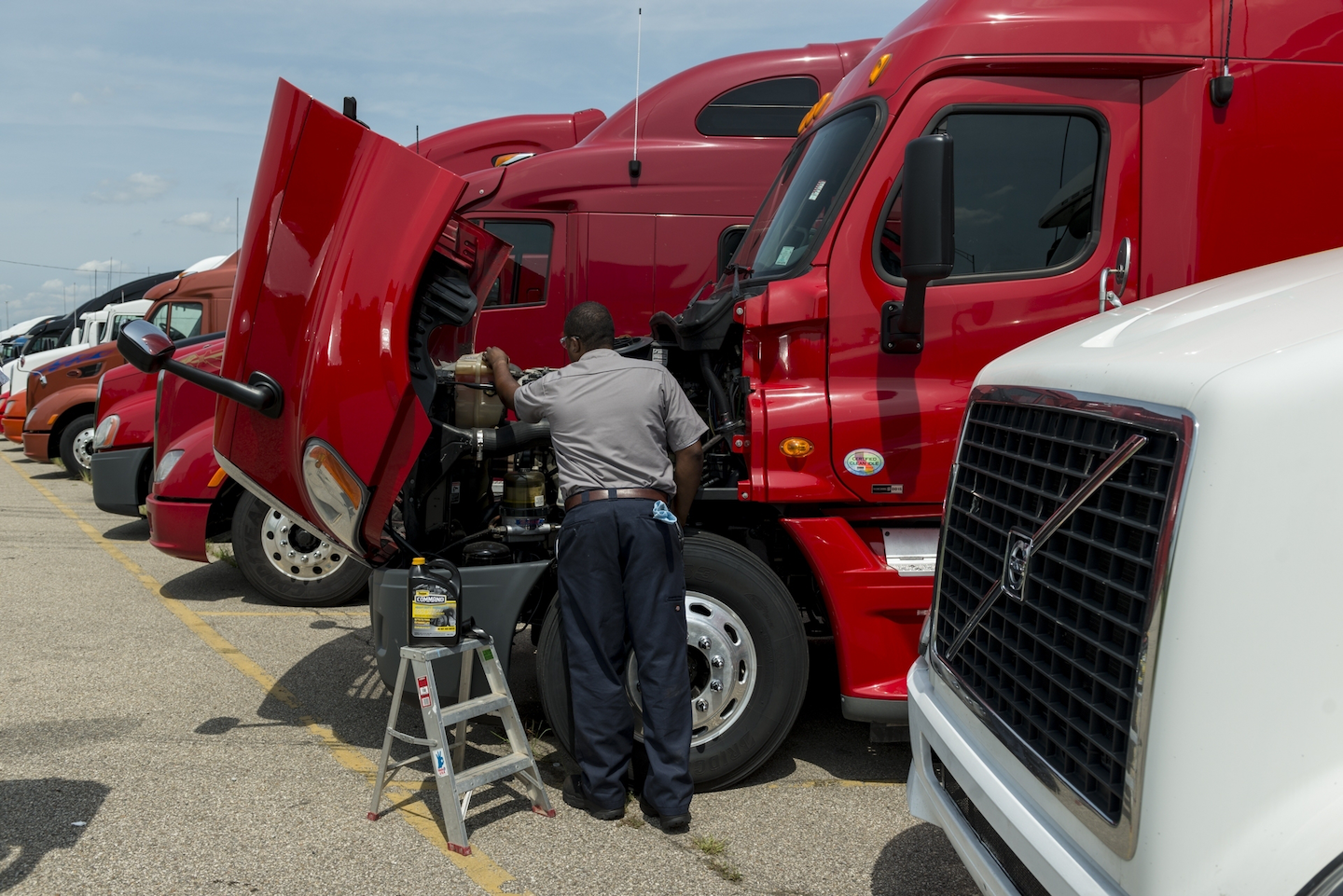 The most common coolants used in the trucking industry today are 50-50 ethylene glycol and water concentrations with freeze points of approximately -34°F, says Stede Granger, OEM technical manager at Shell Lubricants. That number may appear plenty safe from a distance, but Granger says freeze protection levels can change over time for coolants depending on their environment and duty cycle. Freeze protection levels should be checked regularly to ensure they have not changed due to the addition of water or loss of water over time. Which makes a coolant freeze protection test with a refractometer a must for any winterization inspection.

“Look for debris, rust coloration to the antifreeze/ coolant and low levels. Check hoses, clamps and belts. Make sure the cooling system fan is operating properly, the temperature gauge is properly working and remember, check your heater operation before you take off for that long haul,” says Meyers, adding “Check often. There is no harm in inspecting the cooling system in extreme winter weather conditions every 10,000 to 15,000 miles, or less if the truck is going through a gallon or more antifreeze/ coolant a month.”

And in cases where coolant needs to be added, Granger says aftermarket businesses should inform customers that a 50-50 mix isn’t their only coolant option. Most coolants provide even lower freeze points when upped to 60 percent ethylene glycol — but oddly, their freeze points rise dramatically once they surpass that 60 percent threshold. Sixty percent antifreeze and 40 percent water is the maximum concentration Shell recommends in vehicles, especially in extreme cold.

“The freeze point for 100 percent ethylene glycol is actually about 10°F,” Granger says.

The gelling and sludge points above make filters a clear must-check item for any winterization inspection.

Layne Gobrogge, director of heavy-duty marketing for Luber-finer, says filters are first line of defense (and typically the first casualties) of fluids weakened by winter.

“In winter temperatures, fluids become more viscous and create more resistance to flow,” he says. “This can be especially noticeable in fuel filters with the cloud/gel point of fuel where the waxes solidify and block the flow of fuel through the filter media.”

Air filters take their own winter-related beatings from snow and moisture and are equally at risk of clogging and reduced performance, adds Donald Chilton, vice president of product management at WIX Filters.

In each case, manufacturers recommend service providers check all filters during winterization maintenance, replacing worn units and any filter that has been compromised.

Regarding air filters, Chilton says “a quick glance at the air filter is recommended in extreme conditions. A visual inspection of the air box or housing will show any blockage.” 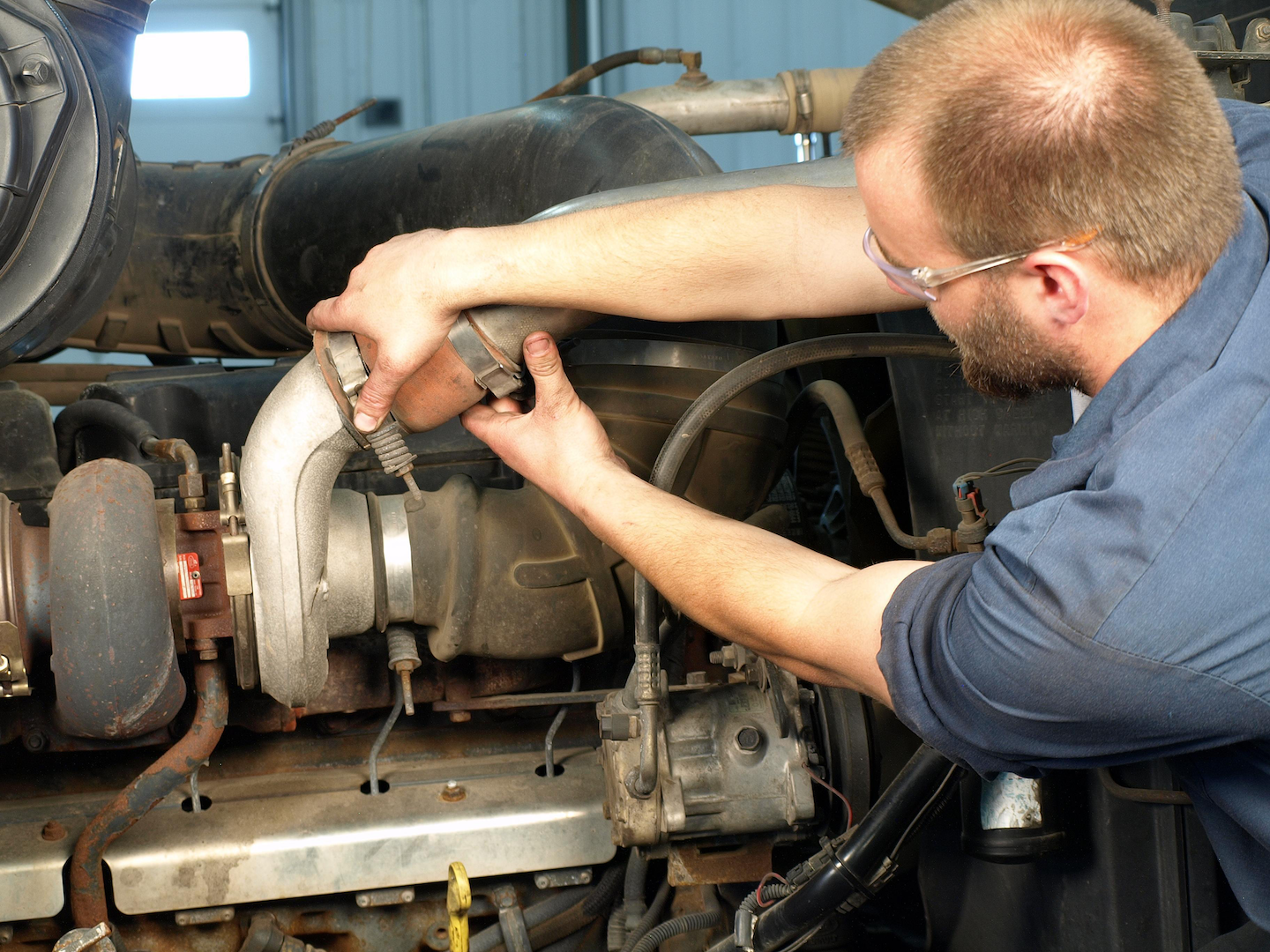 Rubber hoses found throughout engines are susceptible to freezing and cracking in extremely cold temperatures.

Engines are rarely the focal point of PM stops but service providers still need to include them in any winterization service offering. Inspecting the fluids and filters mentioned above will minimize risks of premature engine failures but won’t uncover all winter-related risks.

Cummins Director of North American OEM Service Ron Chapman says his company advises vehicle owners and service providers to perform detailed visual inspections at the outset of the winter and then supplement those inspections with additional scheduled checks. In the worst climates, Cummins also recommends engine modifications to better equip their engines for the harsh environments, Chapman says.

“Our directions typically depend on the type of climate the unit will be operating in,” he says. “We have temperature ranges where we will specify what type of modifications need to be made.”

Chapman says this information can be found in engine maintenance manuals, service bulletins and through Cummins’ customer support.

In addition to the engine itself, there are other under hood components that should be inspected — and in some cases installed — ahead of the winter. Chapman mentions coolant and oil heaters and temperature control fan drives as a few examples, while Henningsen adds fuel filter heaters and fuel water separators.

Henningsen says tractors equipped with these components should be inspected in the fall and parts should be replaced when necessary, and says other tractors lacking the technology can have each product installed fairly quickly during winterization maintenance.

Belts, hoses, wiring and other under hood components also should be checked during this stage. Henningsen mentions rubber components specifically due to their increased risk of freezing and cracking in cold climates.

“Cold weather brings the worst out in a lot of components,” he says. “You have to make sure they haven’t degraded.”

Then there are driver needs. Extra wiper blades, filters, belts, hoses, fuel additives and winter-centric items such as chains, flashlights, bunk heaters and blankets are all items distributors and service providers should offer in addition to winterization maintenance.

Even the most comprehensive preventive maintenance work cannot eliminate downtime, and no end user should be unprepared if they end up in a snow bank or stuck on the side of an icy road.

“Our top priority for our customers is safety,” Atienza says. “We recommend [end user] customers make sure they are prepared for any scenario, including having an emergency bag in case a truck breaks down and they are stranded.”