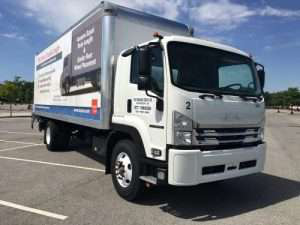 Isuzu’s Class 6 FTR took top marks in fuel economy and maneuverability during recent independent third-party testing against its top competitors in the segment.

The FTR was pitted against a Freightliner M2 106, International DuraStar 4300, Hino 268A, Ford F-650 and Kenworth K270 in five areas most important to owners and operators of Class 6 trucks.

“When we introduced the FTR last spring, some naysayers thought a four-cylinder Class 6 truck could never compete with the six-cylinder models you typically find in this segment,” says Shaun Skinner, president of Isuzu Commercial Truck of America, Inc., “But the results demonstrate that the FTR exceeds expectations against the top vehicles in its class—and beats them all for maneuverability and fuel economy.”

The tests were conducted by Pro Formance Group, Inc. (PFG), in Chandler, Ariz., and the results were certified by the Sports Car Club of America (SCCA). The testing methods were designed by PFG to emphasize consistency and repeatability of results. In addition to SCCA—which sanctioned, observed and validated all testing procedures—PFG engaged Trivinci Systems of Ashburn, Va., to provide all instrumentation and an engineer to capture, record and analyze all data during testing.

In maneuverability testing, the FTR was the clear winner, with a measured curb-to-curb turning diameter of 49.0833 ft., beating the second-place finisher by over 1.79 ft.—and the last-place competitor by nearly 20 ft. This allows the FTR to carry a 24-ft. dry freight box on a wheelbase of only 212 in.—while four of the other five vehicles tested required wheelbases of over 250 in.