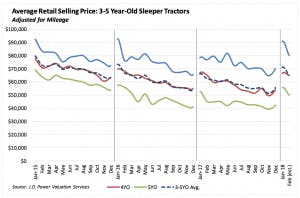 Looking first at the auction market, J.D. Power notes February’s auction scale picked up precipitously over January and offers a “useful insight on how the new year is shaping up.” Volume rebounded after a slow start to the year, and an influx of 2014 model year trucks shows the five-year-old auction market is growing.

“Trucks of most age cohorts were up firmly compared to the same period of last year,” J.D. Power states.

Among the most popular three- to five-year-old cohort, J.D. Power states average prices last month were as follows:

Movement across vehicle models was minimal in January, though J.D. Power states sales per rooftop slipped from 4.7 to 4.5. “January is typically unpredictable, with buyers starting to look for equipment but weather potential impacting activity,” J.D. Power writes. “We expect sales to increase moderately in 2018 in step with improving economic conditions.” 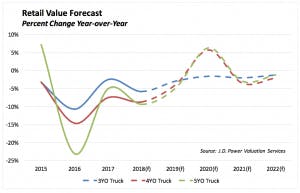 Looking farther into the long term, J.D. Power adds that February’s booming new truck order totals means that 2018 “should see an elevated volume of deliveries. Fleets are taking advantage of tax breaks and incentives and appear optimist about economic conditions in 2018.”

Turning finally to the medium-duty space, most average selling prices were well ahead of the previous month, though J.D. Power states “as of January we are considering trucks one model year older than December, so month-over-month comparisons will be more meaningful next month.”

Overall, J.D. Power states its yearly outlook remains unchanged, “with depreciation averaging roughly 2 percent per month. By the time you this report, the expected increase in used truck supply should be noticeable.” 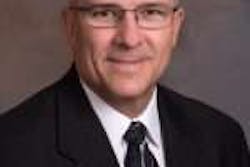 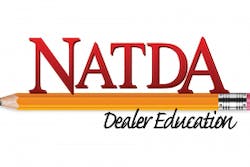 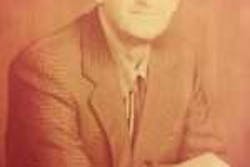 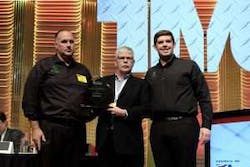