Used prices climb across the board, J.D. Power reports 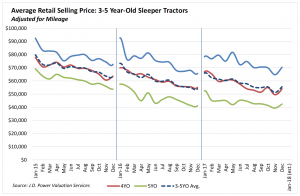 After oversupply shook the used truck market in November, prices in the market responded back with a large jump upward December, J.D. Power reports this week in its Commercial Truck Guidelines market update report.

The retail market showed higher volume rates and prices in December, which J.D. Power says indicates the “late-year [2017] dip was not the start of a trend.”

However, among the industry‘s most popular three- to five-year-old cohort, J.D. Power states retail selling prices dropped an average of “1.7 percent per month in 2017. This figure is significantly better than the 2.3 percent in 2016,” but the company adds “on a year-over-year basis, these same models sold for 4.7 percent less than in 2016.”

Within that cohort, J.D. Power states average prices last month were as follows:

J.D. Power also states there was “little to no competitive movement in December” amongst vehicle models.

Regarding Class 8 sales per rooftop, J.D. Power says numbers dipped from 4.9 to 4.7 units month-over-month, but that overall dealership sales volume was up roughly 8 percent for the year. “That gain represents roughly five additional used trucks sold per rooftop in 2017,” J.D. Power says. 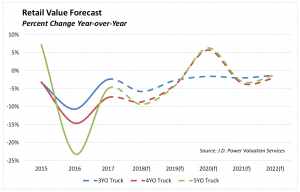 In forecasting the rest of the year, J.D. Power states tax breaks, OEM incentives, a need to modernize equipment and general economic optimism as factors in its decision to keep depreciation estimates at 2 percent per month in 2018.  “The predicted increase in used truck supply should counteract economic improvements to an extent.”