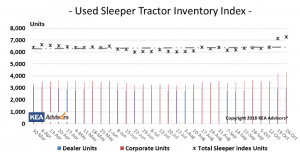 KEA Advisors says its Used Truck Inventory Index is a measurement that approximates national inventory levels. The company started the measurement in March in response to customers wanting to gain a deeper understanding of the dealer network. KEA Advisors states that while the index does not represent all inventory available in the network, it is data pulled from a representative sample of corporate and dealer used truck lots weighted for market share.

KEA Advisors’ John Whitnell says the climb isn’t surprising. “We actually expected this to happen earlier in the year,” he says, attributing the delay to the capacity issues in the OEM channel. “OEMs have thousands of partially built trucks they’ve been waiting to finish it looks like that’s starting to happen.”

One area where the index’s uptick is most pronounced is the sleeper market. KEA Advisors says after the sleeper index bottomed out in July and August it has been climbing slowly for the last few months. The company states “the last three weeks of data indicate to us that the supply crunch for sleepers is likely on its way to [being] over.”

The company says there are two main reasons for that:

Additionally, Whitnell says the uptick in sleeper volume has been significant enough to move the overall index higher despite falling volume totals in the day cab and medium-duty spaces. He says now is the time for dealers to be cautious. It’s rare for a dealer’s business to be permanently damaged by used day cab or medium-duty inventory but having too many sleepers can be disastrous.

“We think that this is going to continue through the fourth quarter and well into 2019,” Whitnell says. “Inventories are starting to build aggressively and high inventories put downward pressure on pricing.” 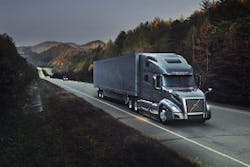 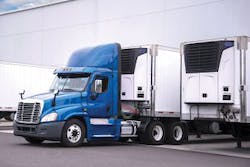 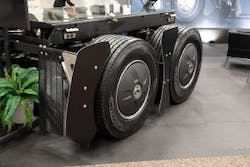 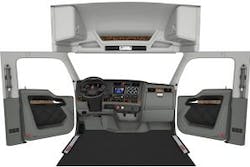