J.D. Power says used market 'not yet showing any signs of pullback' 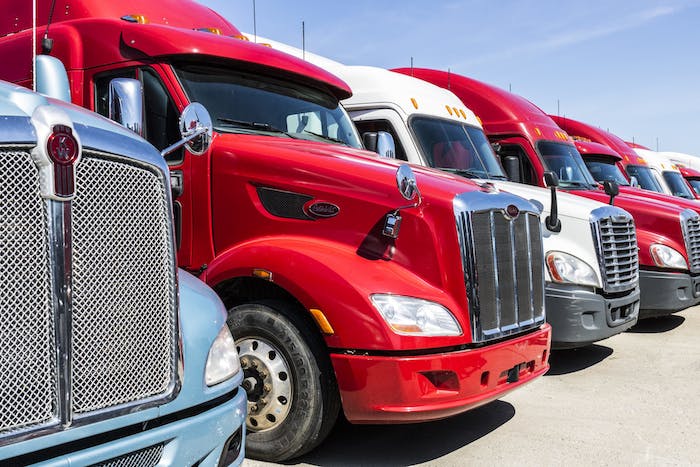 The used truck market is officially defying predictions. In a good way.

J.D. Power reported Tuesday in its August 2021 Commercial Truck Guidelines industry report Class 8 used truck sales prices were up by more than 75 percent in both the auction and retail sectors last month. And with new truck production still slowed by raw material shortages and the general economy booming in spite of major supply chain issues, it appears conditions are right for the used truck market to maintain its strong sales prices through the end of the year, and possibly have one of the best years in recorded history.

In the auction space, July’s results indicate buyers "are still hungry for sleeper tractors with average to low mileage," J.D. Power says. On a month over month basis, J.D. Power says prices were up just 0.7 percent for its benchmark model but are up an astounding 86.5 percent compared to the first seven months of 2020. Late-model trucks also have appreciated 4.8 percent per month on average in 2021 to date. 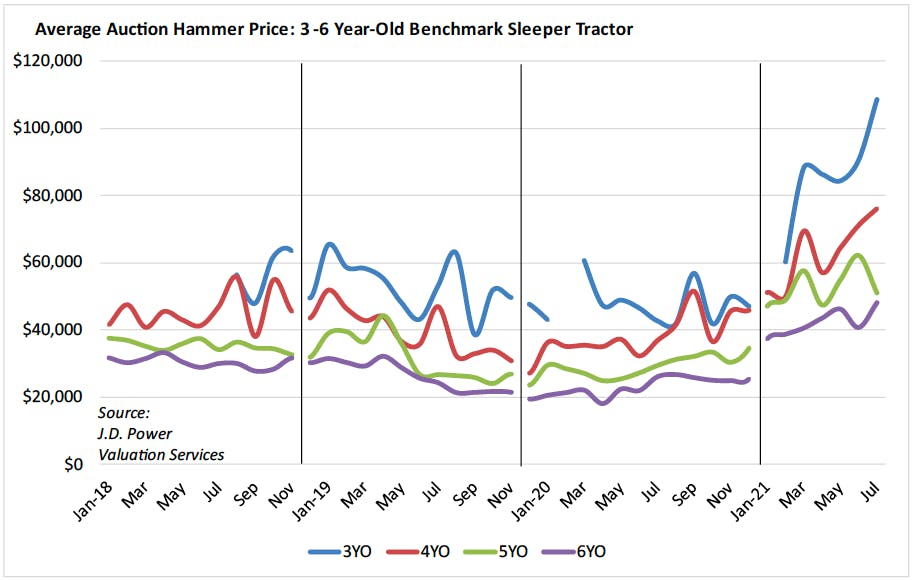 Pricing within the benchmark model was as follows:

"Sales volume was down substantially in July, typical for a month with fewer auctions on the calendar," J.D. Power reports. "The main takeaway from this month’s results is the market is not yet showing any signs of pullback. If anything, prices have strengthened even more."

Pricing was similar strong in the retail space — up only slightly when compared to June but well above industry norms.

Among 2- to 6-year-old trucks, prices averaged as follows:

Month over month the retail market was up 0.4 percent in price. Yet it was up 24.2 percent compared to the first seven months of 2020 and 4.6 percent ahead of the same period 2019. Late-model trucks also have appreciated by 1.8 percent per month this year, J.D. Power reports. 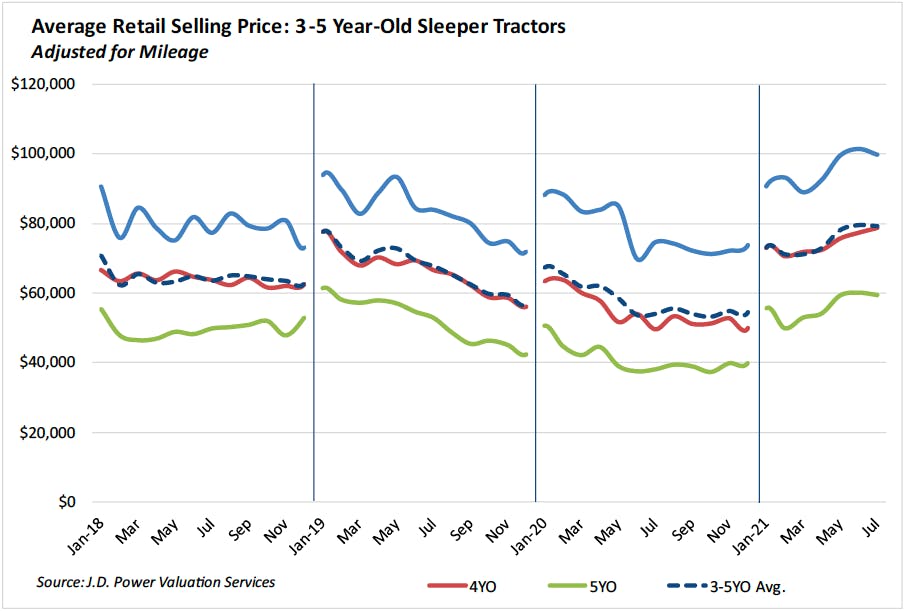 If there was a downside for the retail market, it was volume. Sales per dealer rooftop fell to 4.7 trucks for the month, 0.6 trucks below the previous month. J.D. Power attributes to the drop to availability.

The company adds that looking at the months ahead, "the parts shortage has stayed critical longer than we predicted, which means new truck supply should remain tight in upcoming months. As such, used truck pricing should stay strong as well, assuming economic conditions stay the course."

The medium-duty market wasn't quite as strong in July as its heavy-duty counterpart, but still remains strong when compared to prior years.

Additionally, the company states strong economic conditions should also help the medium-duty space remain strong and stable in the latter half of the year. "The ongoing new truck shortage should keep the supply/demand balance for used medium duty trucks solidly on the seller’s side in upcoming months," the company says.

But J.D. Power also cautions against too much economic optimism due to rising COVID-19 cases nationwide, stating the economic reopening "continues to be held back by local and regional outbreaks of the Delta variant of COVID ... the economy won’t return to normal until the virus is for all intents and purposes behind us, and that requires more people in COVID hot spots to get vaccinated." 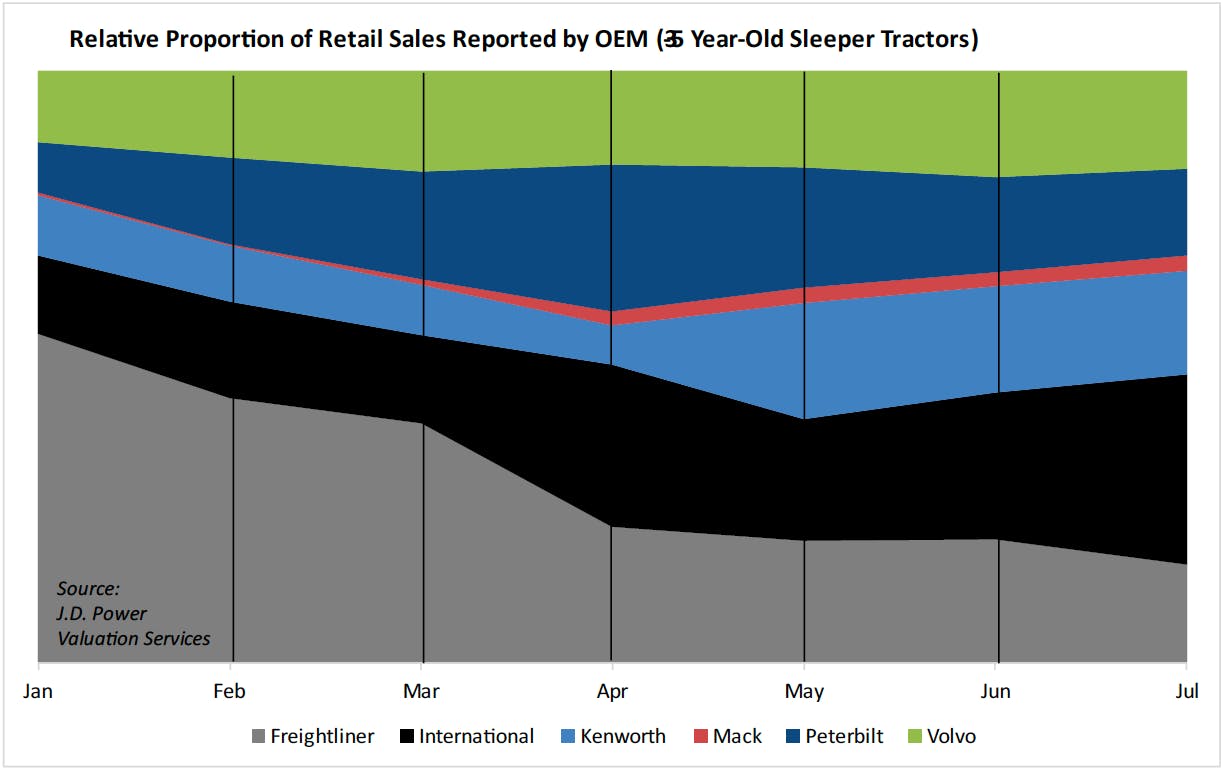 Yet the company also notes as long as the economy is able to remain open and prosperous, the used truck market will continue to reap the advantages created due to the supply chain challenges plaguing new truck production.

"This situation has lasted longer than we predicted, and at this point we’re not even sure there will be much improvement through the end of the year," J.D. Power states. "Like everyone else, we’ll be talking with our OEM contacts to get a feel for the production environment and watching the auctions for any notable increase in fleet trades." 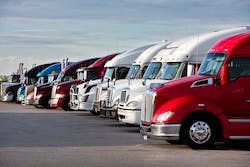 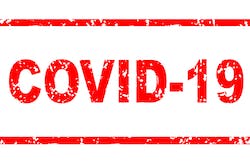 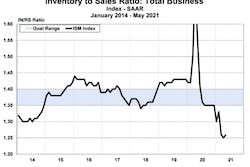 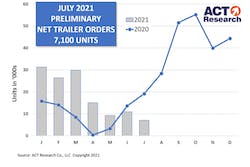