Biden announces plan to require vax, COVID testing for companies with 100-plus employees 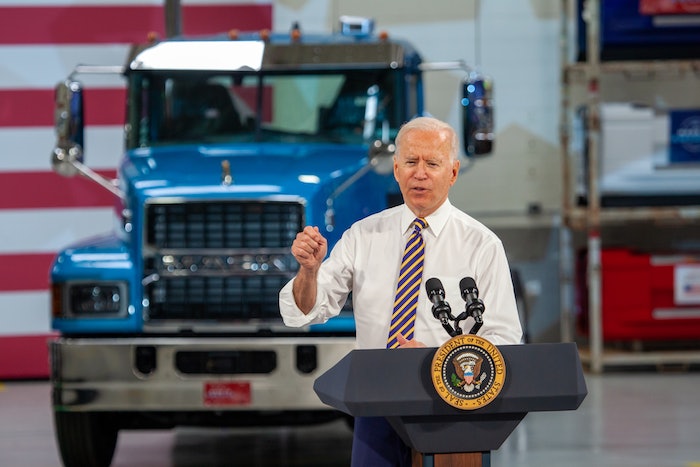 Mack Trucks in July hosted President Joe Biden at its Lehigh Valley Operations (LVO) facility in Macungie, Pennsylvania, where all Mack heavy-duty models for North America and export are assembled.

President Joe Biden Thursday took his longest step to-date in the ongoing crusade against COVID, announcing that the Department of Labor will require all employers with 100 or more employees to ensure their workforce is fully vaccinated or show a negative test at least once a week.

Occupational Safety and Health Administration (OSHA) is developing the rule, which is expected to impact more than 80 million unvaccinated workers in private sector businesses with 100 employees or more, and will issue an Emergency Temporary Standard to implement it. Employers, per Biden's rule, will be required to offer employees paid time off to facilitate their vaccination and recovery from any side effects.

Businesses who fail to comply can face fines of thousands of dollars per violation.

The new rule will still have to pass through the Federal Register so its effective date is unclear, and governors from various states – including Arkansas, Wyoming and Georgia – are already lining up in opposition.

"The vaccine mandate is unprecedented in its audacity and unlawful in its application," Alabama Attorney General Steve Marshall said via statement Monday. "The Biden Administration knows this full well. The State of Alabama will not allow such an authoritarian power grab to go unchecked. When they file their proposed rule, we file our lawsuit."

Biden noted his plan "will affect 100 million Americans – two-thirds of all workers" and made clear his frustration with citizens who have yet to get at least one jab.

"What more is there to wait for? What more do you need to see? We made vaccinations free, safe and convenient," he said, noting that more than 200 million Americans have received at least one shot. "We've been patient but our patience is wearing thin."

Biden also announced that there will be enough booster shots for everyone, adding that a nationwide distribution system is ready and as soon as they are authorized, those eligible will be able to get a booster right away for free.

[Related: Fleets reluctant to require vax, but it might not matter]

Biden said he would also sign an executive order requiring vaccination for contractors who do business with the federal government, and they wouldn't have the option to trade vaccinations for weekly COVID testing.

Biden's COVID-19 Action Plan, the Administration said, is a six pronged initiative designed to increase the vaccination rate, decrease hospitalizations and deaths from COVID-19 and keep schools and the economy open. Biden also plans to require vaccinations for healthcare workers in places that receive Medicare or Medicaid reimbursement. Biden previously mandated COVID vaccinations for military service members. Also Thursday, he called on entertainment venues – sports arenas, large concert halls, and other places where large groups of people gather – to require patrons be vaccinated or show a negative test for entry.

Biden’s mandate could derail carriers’ plans to mostly stay out of their employees’ – including drivers’ – vaccination status.

According to a CCJ survey conducted this month, 91% of for-hire and private carrier respondents said they had not mandated that employees receive a COVID-19 vaccine and/or agree to undergo regular testing, and almost 60% said they didn’t plan to enact such a measure.

Among for-hire carriers with 101 or more trucks – a size large enough to be swept up in Biden’s mandate – 93% thus far have yet to implement testing or vaccinations and 52% said they don’t plan to. Just more than 26% of this same group said they were undecided and were seeking advice and/or counsel before making a decision.

Among the carriers who have yet to implement a vaccine or testing mandate, 11% said they were in the process, 19% were undecided and another 11% felt more comfortable incentivizing vaccinations rather than requiring them.

Indeed, incentivizing employees to get vaxxed has so far been the preferred method for carriers to motivate staff to take a COVID jab, with 7% of carrier respondents offering cash or bonuses and 12% offering paid time off. Another 3% said they had offered “other” incentives.

American Trucking Associations President and CEO Chris Spear pushed back on the proposal, saying "these proposed requirements – however well-intentioned – threaten to cause further disruptions throughout the supply chain, impeding our nation’s COVID response efforts and putting the brakes on any economic revival."

Since a large percentage of the industry is made up of fleets with fewer than 100 employees, Spear said the mandates will pit large trucking companies against smaller ones who fall below the employment cutoff of 100 for mandatory jabs or testing.

"If these mandates are designed to protect Americans, then why the discriminatory 100-employee threshold, picking winners and losers for both employees and employers? As this proposal moves forward, ATA is examining all options and will choose a path that protects our industry so that it can continue delivering on behalf of our country," he said.

The Owner-Operator Independent Drivers Association said it believes “the decision regarding vaccinations to be a personal choice for individuals and likewise for companies.” OOIDA added that most of its members are not considered employees.