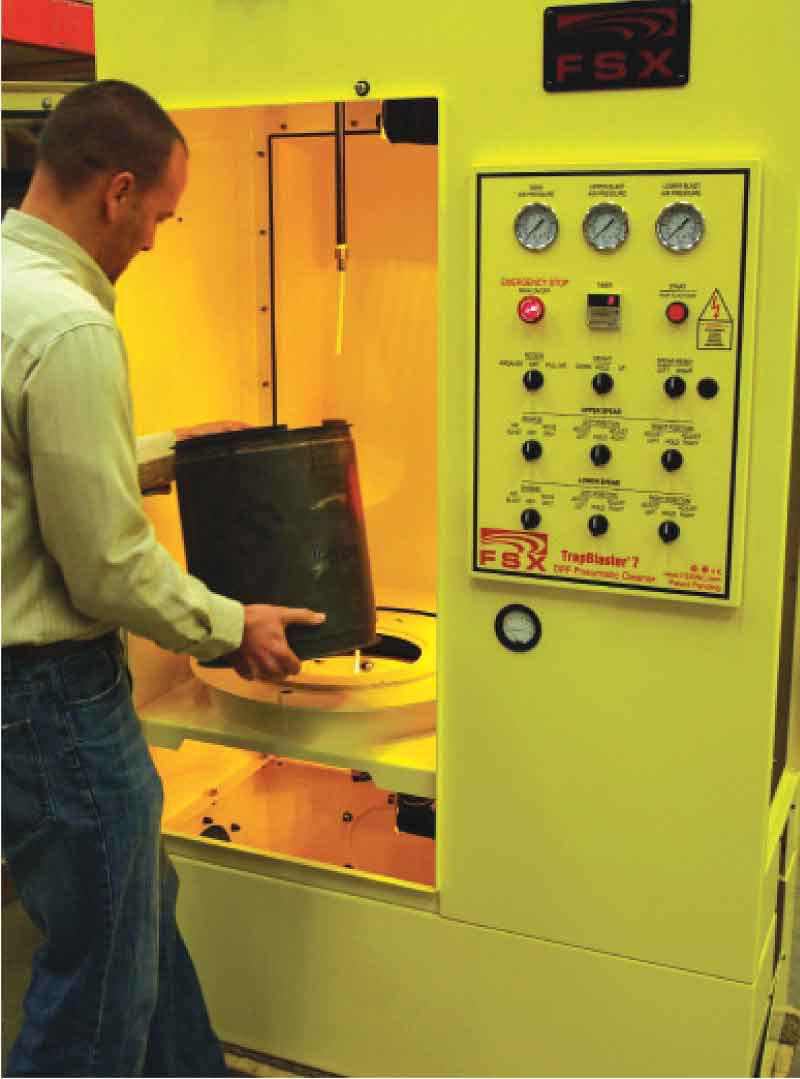 With scheduled cleanings and a little care, a diesel particulate filter should enjoy a long service life.

Diesel Particulate Filters (DPFs) hardly enjoy an easy ride. The can-shaped addition to exhaust systems — needed to meet 2007 emission standards — faces an ongoing attack in the form of high temperatures, pressures, vibrations and corrosive chemicals. In the face of all that, they are expected to capture soot, reduce everything to a fine ash and hold the remains until it is time for a cleaning.

But decisions and steps in the shop can help determine whether the filter will make it from one scheduled cleaning to the next.

The choice of engine oil certainly can make a difference. “Most OEs have designed the aftertreatment systems for exclusive use with CJ-4 oil,” notes Matthew Leustek, a Caterpillar on-highway engine core technology and systems engineer, referring to the low-ash formulas that were made possible with the widespread introduction of Ultra Low Sulfur Diesel (ULSD).

“Not using CJ-4 will lead to measurably worse fuel economy over time due to higher ash accumulation rates, potentially lead to DPF failures, potentially lead to low-power complaints [because of elevated back pressure], and may lead to the inability to effectively ‘ash service’ the DPF in extreme cases.” It will be difficult to measure the change in fuel economy from month to month, but a trend will emerge over a year, he says.

Granted, a typical build-up of ash should be largely unnoticed by drivers, notes Ed Saxman, product marketing manager for Volvo Trucks North America. “In reality, both the inlet air filter and the DPF are large enough that, with proper maintenance, there is not a significant difference between a new filter and a dirty filter.”

A DPF usually will arrive in a shop when it is time to address its increasing load of ash. That is when teams will need to decide whether to clean the equipment themselves, or participate in an exchange program offered by an OEM.

While the cleaning process largely uses a controlled shot of air, it involves more than reaching for the hose attached to the shop compressor.

The ash doesn’t build up evenly across the entire filter, explains Drew Taylor, national sales director and minority owner of FSX, which provides equipment used by shops including Navistar, Kenworth and Peterbilt dealerships. A cleaner that fails to account for the difference will leave behind deeper channels of ash that eventually will transform into dense “pencils” that actually can change the thermal characteristics of the filter.

“When the onboard active regeneration system hits that DPF with a whole bunch of heat, that heat is going to clash with the cool zones,” he says. The result will be an unwanted crack and a costly replacement. At the very least, the added ash will limit the filter’s surface area and reduce the amount of time between cleanings.

In the FSX system, the cleaning takes place in a sealed cabinet where a series of moving “air knives” blast air into both ends of the filter core, breaking up any ash and sending it to a central SootSucker dust collector. Once the cleaning process in this TrapBlaster is complete, an FSX TrapTester is used to measure the thickness of any ash under 750 cfm of pressure, which is roughly what would be generated by a 13L engine running at a high idle of 3,500 or 4,000 rpm.

The photo on the left shows a diesel particulate filter prior to cleaning. The one of the right shows what a cleaned DPF should look like.

If the cleaned component fails to meet the “green tag” range associated with the identified filter, the DPF is placed into a kiln known as the TrapBurner, where it will be baked at temperatures of up to 1,112ºF for up to 12 hours. By then, the filter should be free of any soot and ready for a final cleaning in the TrapBlaster.

While most states will allow the resulting ash to be disposed in a landfill, Taylor expects a growing number of jurisdictions to follow California’s lead, where the debris is classified as a low-level hazardous waste.

Systems like these have yet to find a home in every shop, but Taylor suggests that the machines will offer a return on investment after just one cleaning per day. The set-up also is relatively simple.

His company’s equipment can be matched to any source of three-phase power, while the TrapBlaster itself will draw air from a compressor that delivers at least 120 cfm of air at 100 psi, similar to what would be delivered by a typical 30-hp rotary screw compressor. 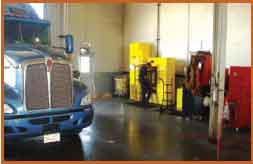 If the shop needs to use more of the air downstream, the cleaner’s requirements can be cut in half by using one air knife at a time. That simply doubles the traditional 30-minute cleaning process.

Still, some shops are deciding to leave the cleaning to others, with Volvo, Mack and Detroit Diesel collecting cores, cleaning the filters and refining the inspection process. Even when it is loaded with ash, a 40-pound filter will weigh about the same as the day it was installed, Saxman says, questioning the accuracy of other inspection methods.

The difference is so slight that Volvo uses a scale which reaches all the way down into the bedrock, just to ensure it can accurately measure subtle weight changes in terms of grams or tenths of a gram. That way, there is no question about whether any ash remains.

The actual removal or replacement of the DPF itself is a relatively simple process that takes less than half an hour, using nothing more than a simple shop jack. In the case of a Volvo truck, a fairing around the fuel tank hinges out and off, while the filter itself is held in place with band clamps and connectors.

“Place the dirty one into the protective shipping box and return it to the dealer for another. It’s that simple,” Saxman says. “The whole process doesn’t require a service bay.” Anyone in the shop who can change brake linings will have the skills needed for the task.

Granted, there is a need for some care. Installers need to properly align any

O-rings when putting a new one in place, and be careful not to drop the filter. “The last thing anyone needs is a worthless piece of ugly ceramic art,” observes David Mc­Kenna, Mack’s director – powertrain sales and marketing.

Ongoing preventive maintenance is largely limited to inspecting the inlet’s flexible piping or the tubing that feeds the delta pressure sensors. Cracks or loose clamps around the inlet flex pipe could sacrifice some of the passive heat needed to oxidize any of the soot, he warns.

And if the DPF itself is cracked or partially melted, technician will notice a black coating on the surface behind the filter.

“If you see smoke coming out of a truck with a DPF, it’s got a crack in the DPF,” Saxman adds, noting how the damage could be caused by collisions or stressed V bands. “That’s really a giveaway that it’s broken.”

But there are other potential sources of trouble. The DPF could be fouled by oil that escapes through the turbocharger, or a bad seventh injector that leaks unwanted fuel into the exhaust stream, McKenna says.

The injector itself is designed to add fuel to the catalyst to force an “active” regeneration of any soot when sensors determine that the “passive” heat in the exhaust system has not completed the job. (Volvo and Mack actually have eliminated the active regenerations in 2010 engine designs, and rely entirely on the passive approach.)

One of the most common causes of DPF failures even occurs in the shops themselves, when technicians fail to follow all the necessary steps while using a service tool to force an active regeneration, he says.

A filter might appear to be clogged even though the issue is really linked to pressure sensors that are plugged with carbon. If these small tubes are not inspected and cleared, the regeneration process will lead to extreme heats which actually could crack the device.

“We have a diagnostic tree that you really have to follow. If you start cutting off branches to where you want to go, you will miss items,” McKenna says.

In cases where the DPF is clogged prematurely with heavy levels of soot, the challenge usually is traced to a driver who has used an available switch to stop an active regeneration. (The switches are put in place so drivers can halt the process if they are in an area where an idling engine would lead to unwanted noise, or when the added heat actually could present a hazard.)

Another cause could come in the form of a clogged seventh injector, or heat that is lost through a crack between the turbo outlet and the DPF’s inlet. If the latter situation occurs, drivers likely will report smelling the fuel for short periods of time. If they report excessive exhaust noise during a regeneration cycle, the problem likely will be traced to something like a loose clamp or cracked flex pipe, McKenna says.

Given the high cost of the filters, Saxman suggests that the next generation of used truck buyers will be focusing on the ongoing care that a DPF receives. They will want to know that the device still has many miles of service ahead of it.

It is a particular interest that can be expected to increase over time.