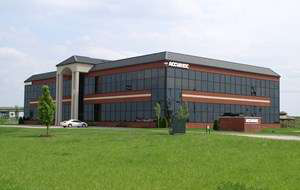 Accuride’s decision followed a thorough review of options for reducing its overall headquarters costs, including the possibility of consolidating headquarters activities in cities outside of Indiana, the company says.

Joining Accuride and Evansville Mayor Lloyd Winnecke in making today’s announcement are the Growth Alliance for Greater Evansville and the Economic Development Coalition of Southwest Indiana, which are providing incentives to help retain Accuride with support from Vanderburgh County. These leaders, together with building landlord Woodward Commercial Realty, collaborated to secure Accuride’s 77 highly-skilled, well-paying salaried positions at its corporate headquarters that yield a positive economic impact of approximately $92 million dollars per year for the Evansville community, the company says.

“We are proud to extend our tenure as corporate citizens of Evansville and Vanderburgh County,” says Rick Dauch, Accuride president and CEO. “After assessing the options available to us, remaining at our present location was clearly the best solution for Accuride and our associates, providing continuity for our company and the community. We greatly appreciate Mayor Winnecke’s leadership and the efforts of Woodward Commercial Realty and area economic development officials for helping make this outcome possible.”

“As a fixture in the commercial vehicle industry and one of a handful of public companies headquartered in Evansville, retaining Accuride as one of our leading corporate citizens was a top priority for us,” Winnecke says. “We are pleased that Accuride has decided to remain headquartered here in the face of other viable options and look forward to the company’s continued involvement in our community’s progress.”

Accuride says the local retention incentive package for this project includes a training grant from the Vanderburgh County Tax Increment Financing (TIF) District, referred to as the Burkhardt TIF. The $100,000 grant will award Accuride $20,000 annually over the next five years for employee development programs and support activities aimed at improving the company’s operational efficiency and global competitiveness, the company says.