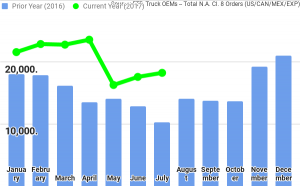 The forecasters note those totals were approximately 80 percent better than the same time last year.

“This is a great sign to see orders rising, even slightly, in mid-summer. This is the beginning of a positive trend that we expect to continue the rest of this year, right into 2018. The Class 8 market is starting to move upward and orders are forecasted to accelerate in the fall,” says Don Ake, vice president of commercial vehicles at FTR.

“While down on a nominal basis from the 2017 order trend, seasonal adjustment brings July’s order intake in-line with recent activity,” says Kenny Vieth, ACT president and senior analyst. “Over the past six-months, Class 8 net orders, seasonally adjusted, have averaged 21,900 units/month.”

FTR adds that Class 8 orders have increased for the second month in a row, a positive sign during the summer months. The market remains stable, but is moving in a positive direction. This is consistent with the FTR forecast, the company says. Orders for the past 12 months total 224,000 units.

“Freight is on the upswing and industry capacity is tightening.  The equipment markets, both Class 8 and trailers, are starting to respond to this environment,” Ake says.

Looking at the Classes 5 to 8 markets as a whole, ACT Research says orders were lower month over month, but a 33 percent increase from last year highlights the significant improvement in demand that has occurred over the past twelve months.

“Despite the 26 percent decline from June, orders were still 2 percent better than last year,” adds Vieth.