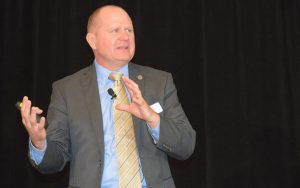 FTR CEO Eric Starks says the economic fundamentals that push truck and trailer orders should remain strong through next year. He spoke at the firm’s annual FTR Conference in Indianapolis this week.

Class 8 truck orders have surged to record highs over the past 12 months in response to the industry’s maxed-out capacity and other factors, and analysts at FTR see no signs of orders slowing down in the coming year.

FTR issued its updated truck and trailer forecasts at its annual conference in Indianapolis, Indiana, this week.

Likewise, four of the top five months for truck orders have occurred this year. “That puts into perspective what we’ve seen this year,” he says. “Orders are at historically high levels.”

Holding back truck orders, and to an extent trailer orders, is manufacturers’ ability to keep up with order demand. Suppliers’ ability to provide truck OEs with parts has clogged truck and trailer manufacturing, says Ake.

Surging rates and tight capacity have been the main drivers this year of the flurry of order activity, says Eric Starks, president and CEO of FTR. Mitigating factors for truck and trailer orders in the coming year include political uncertainty with U.S. trade policy and inflation, he says.

Susan Alt, vice president of public affairs for Volvo Trucks North America, spoke in a separate session at the FTR Conference but corroborated the data presented by FTR analysts, as well as truck makers’ issues in securing necessary parts. “The supplier crunch is absolutely real,” she said.

The recent surge in truck orders has a different feel than the most recent order run-up in 2015, she said. That year, dealers were placing orders for trucks that often didn’t have a buyer attached as a means to secure build slots. “That’s what seems to be different,” this year, she said. “Our order board is solid. This is real freight out there.”

Alt said that trade tariffs instituted by the Trump Administration have driven up the prices of Volvo and Mack units already, though it hasn’t mitigated truck orders. “We use steel and we use aluminum,” she said. “But there’s so much freight demand it’s not having much of an impact“ on truck demand.