Preliminary used Class 8 volumes (same dealer sales) decreased 3 percent month-over-month and dropped 24 percent year over year in October. That said, through the first 10 months of the year, activity is 4 percent higher compared to the same period a year ago, according to the latest preliminary release of the State of the Industry: U.S. Classes 3-8 Used Trucks published by ACT Research.

Other data released in ACT’s preliminary report included month-over-month comparisons for October 2021, which showed that average prices rose 3 percent, as average miles and age gained 1 percent each compared to September.

“Despite preliminary same dealer sales slipping into contraction territory on a month-over-month basis, the unusual, on a seasonal basis, sequential softness held no sway over the longer-term year-to-date comparison, which edged higher. The industry’s ability to outpace 2020, albeit by a small margin, is nothing short of miraculous, given all the challenges used truck sellers have faced this year. In the context of the lowest level of inventory the industry has probably ever seen, dealers have pulled out all the stops in an effort to provide buyers with as many units as humanly possible,” says to ACT Vice President Steve Tam.

Tam adds, “However, since dealers are still not able to meet the voracious demand, used truck prices continued on their upward trek in October.” He concluded, “Given the dynamics of underlying fundamentals, namely freight and freight-hauling capacity, prices are likely to continue climbing higher in the near term.” 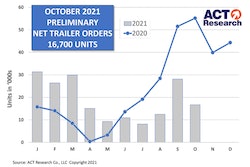 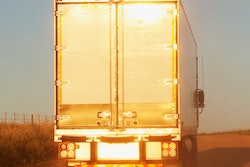 Final trailer orders fall as OEMs are cautious about overbooking 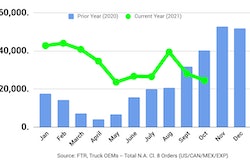 Orders for Class 8, medium-duty trucks pull back in October 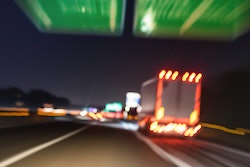