Heavy Duty Aftermarket Week (HDAW) 2021 is coming to your city. And your office. And your living room.

Not literally, of course, but with the COVID-19 pandemic still making on-site events like a 2,500-person industry conference hazardous, HDAW’s ownership group announced in October that this year’s conference will be held virtually Jan. 25-28, 2021.

After a decade in Las Vegas and last year’s successful transition to Grapevine, Texas, HDAW’s co-owners and joint operating committee have spent much of the last several months working to reimagine the independent aftermarket’s most-popular event from its established in-person schedule into an exciting, innovative and engaging virtual convention.

Organizers announced the theme of “Improvise. Adapt. Overcome.” a few weeks after announcing the virtual transition, grabbing the common phrase from the U.S. Marine Corps to use as an apt descriptor of the change in venue and the shift the aftermarket, trucking industry and economy at large have experienced due to COVID-19.

In chatting with event co-chairs Andy Robblee of Six Robblees’ and Drew Hofley of Accuride last month, the duo say the independent aftermarket will be impressed by how effectively HDAW’s leadership team has been able to reimagine the established conference into an interactive virtual event. Though both men acknowledge HDAW won’t be quite the same online as it would be in person, the takeaways the aftermarket has become accustomed to receiving during HDAW will still be present when the event kicks into gear in three weeks.

“I’m very bullish about what HDAW will be able to do with this format,” says Hofley, Accuride’s senior vice president, sales. “We’ve all been to a bunch of HDAWs so we know how the event typically goes. This one is going to be unique, but by making the theme about what’s changed in our industry and the lessons we’ve learned [this year], I think the event is still going to have a lot of value.”

One way organizers have ensured the virtual event will remain valuable is by identifying the most popular and highest-rated features of prior HDAWs and prioritizing them in the 2021 virtual format, such as the 1-on-1 supplier and distributor meetings. HDAW organizers are doing everything in their power to make those sessions as close to normal as possible, and Robblee says he’s optimistic that when distributors and suppliers sign on for their first sessions they’ll realize the virtual format shouldn’t inhibit their ability to do business.

“The ownership group has done a tremendous job of ensuring that segment of the week is as similar as it possibly can be,” says Robblee, Six Robblees’ president. “I believe we’ll be able to discuss all of things we normally would [at HDAW].”

Event organizers also have been smart in developing an educational program with speakers capable of expertly communicating the challenges faced in 2020 and ahead in 2021. HDAW brought the previously HDAW-adjacent Service Opportunities Learning Days (SOLD) program for aftermarket service shops under the HDAW umbrella last year, and this month both programs have captivating speakers on tap.

(Trucks, Parts, Service will have more about this month’s HDAW and SOLD speakers in future event previews later this month.)

Additionally, while HDAW’s co-chairs readily admit the losses of HDAW’s networking and social events are unquestionably big, they do see silver linings in shifting to the virtual format that could prove useful when the program eventually returns to Grapevine.

One advantage is the simple accessibility of the virtual format. One of HDAW’s biggest challenges in recruiting distributor attendees over the years has been the travel commitment. Taking at least three days to travel across the country for a conference — even one as valuable as HDAW — isn’t an easy choice for many small business owners. But as a virtual event, HDAW should appeal to anyone in the aftermarket looking to strengthen their business, Robblee says.

“I think for those people that used to comment that they couldn’t go to HDAW because they had too much to do at the office, that complaint should go away,” he says. “They can attend HDAW while they’re at the office.”

There’s also the matter of the pandemic. Thanks to its position on the calendar, HDAW has always offered the aftermarket a great opportunity for self-reflection and discussion of the year ahead. HDAW allows people to “knock off the rust from the holidays and get into game mode,” Hofley says. “This year I think we’ll need that more than ever.”

This is the first of four TPS articles previewing HDAW 2021. The second article in the series will be posted next Monday.

For more information, and to register for HDAW, please CLICK HERE. 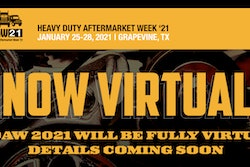