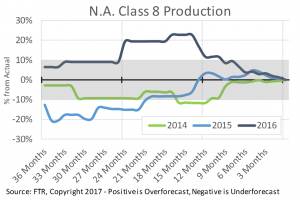 FTR has finalized truck and trailer builds for 2016 and completed its annual CV Forecast Accuracy Report.

The report details the accuracy of FTR’s 2016 Commercial Vehicle forecasts from January 2014 through December 2016 and covers Class 8 trucks, commercial trailers and Class 4-7 (medium-duty) trucks. The analysis also shows the accuracy results of the FTR 2014 and 2015 forecasts.

Due to the run-up of production in 2015, FTR says forecasting Class 8 trucks for 2016 was a significant challenge. The OEMs overbuilt in relation to the 2015 sales pace, leading to near-record inventory levels in 2016. This resulted in production cuts that were deeper and implemented faster than anticipated. Despite this, as outlined in the Forecast Accuracy Report, FTR’s forecast was near the +/-10 percent accuracy goal at 12 months out.

FTR also says it was one of the few firms to forecast that Class 8 demand would bottom out in December of 2016 and then begin to recover. The 8 percent increase in Class 8 builds from 2016 Q4 to 2017 Q1 is proof of these results. Notably, FTR’s 2016 forecast never fell below 223,800 units for the year. The FTR forecasting models also were quite accurate in predicting both the timing and the bottom of this cycle, the company says. The report details the accuracy (percent from actual) of the 2016 forecasts by month for a time period of 36 months prior, through December 2016.

FTR’s 2016 trailer forecast was outstanding with accuracy within the +/-10 percent standard a full 24 months out and then was very close to the final total throughout the entire year of 2016. The accuracy of the quarterly forecasts was also exceptional in 2016, the company says.

FTR says Class 4-7 forecasts were well within the accuracy goal at least 36 months out primarily due to the recent stability of this segment. While the accuracy was still within standard during 2016, there was some fluctuation due to production spikes and inventory movements, the company says.

“FTR had another solid year of forecasting commercial vehicle activity in 2016,” says Don Ake, vice president of commercial vehicles. “It is always difficult to forecast Class 8 truck demand when inventories are bloated.  However, our forecasting models were correct in indicating that build would bottom out at the end of the year. We were the only major forecasting firm to do this. We were particularly pleased with our trailer forecast for 2016 with numbers that were highly accurate from about 16 months out right to the finish. The quarterly numbers were spot on as our forecasting models correctly predicted the easing trailer build in 2016. The Class 4 to 7 forecast was outstanding for the second consecutive year with our forecasting models working very well in predicting the build rates in this sector.”

“FTR takes developing our forecasts very seriously,” Ake adds. “We use a dedicated, strenuous process involving nine highly-skilled individuals with over 250 years of combined industry experience. Exclusive to FTR, we utilize our proprietary freight and forecasting models to provide the most accurate forecasts available. We are pleased to continue providing reliable data to our clients and subscribers.”

For a free copy of this report, please CLICK HERE.