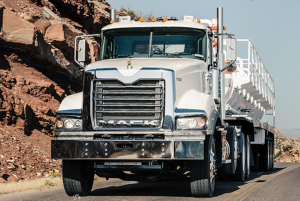 Mack remains focused and bullish about 2017 despite its concerns over what it calls ‘bureaucratic mismanagement’ on behalf of the Trump administration.

Business may get even better if President Trump does his part to improve key U.S. policies, according to Slagle, who’s also an executive vice-president at Volvo Group, Mack’s parent company.

“We’re hoping to get through the mismanagement he’s done with the bureaucracy, to get back on the agenda that we think can be helpful to the market, things like infrastructure, deregulation and overall business-friendly policies may not cause the boom we’re all hoping for but it will certainly keep us all on a good track,” Slagle told reporters late last week in Charleston, S.C. during Mack’s “Born to Haul” press event.

Slagle said Mack has been enjoying quite a bit of momentum in the first quarter during what he calls a more organized market. As Slagle began talking with reporters, inventory reduction ranked at the top of his list.

“We like everyone else were caught with too-high inventories. The peak in the industry was October 2015. I think everybody in the industry, including Mack, has been successful in reducing that inventory down to—let’s call it—a healthy level,” said Slagle.

“It’s good because it means the market was there. It wasn’t that people weren’t buying—they weren’t buying as much—but it was good enough to get the inventories down to safe levels. Again, emphasizing that virtually all of that inventory problem was in highway.

“We’ve gone through the journey of that—that part of the cycle—and now I think the inventories, industry-wide, are at a good level. We can now look forward to the factories building towards the demand rather than the factories building less because people are trying to reduce inventory. That part is evening out. I think all manufacturers are looking at some sort of ramp to adjust to true market conditions.”

Slagle, whose prior job was that of CEO of Volvo Construction Equipment North America, said he was surprised to learn that vehicle uptime was not a priority when he joined Mack in 2008.

“It’s funny. When I came in from construction equipment back in 2008, when you’re selling 75-ton excavators and 40-ton R-tics (articulated dump trucks), you know all about the outcome. But it was surprising to me when I came over—and it was at a time when it was $4 a gallon gas—it was surprising to me that we weren’t talking enough about uptime during that time.

“Almost all of the focus was on fuel economy, total cost of operations—as it should be—that’s a fundamental part of the business—but we have taken steps to become a market leader in the way we approach the management of uptime and helping customers through minimized downtime.”

Randall noted Mack’s ongoing dominance in the construction segment and that Mack would later reveal its plans to gain a stronger foothold in the long-haul segment.

Randall said that Mack’s success was owed to several factors, including its strength in the vocational market, improved uptime and product enhancement namely through its mDRIVE transmissions which continue to claim additional market share.

While Mack’s new mDRIVE transmissions were spec’d last year in 20 percent of its trucks, Randall said that number this year “is already at 37 percent penetration and is continuing to grow.”

“In terms of the Volvo Group, we have ownership of Arrow, which is a used truck business that has kept us out of trouble you might say,” Slagle said. “The used truck part of the business has certainly been one of the wild cards not only in the past but looking forward. Volvo and Mack has navigated that very well with the help of arrow.”

Volvo Group also owns Dex, a company that disassembles medium to heavy-duty trucks and then refurbishes or recycles the parts.

Mack dealers have also contributed to the company’s current momentum, according to John Walsh, Mack’s vice-president of global marketing and brand management.

“There’s been more than half a billion dollars invested by the dealers into the network since 2010: new facilities, upgraded facilities, more service bays, more technicians—all supportive of this commitment to uptime and keeping customer vehicles where they need to be which is out on the road generating revenue,” Walsh said.

Mack itself continues to make investments.

“If you go back to 2010, there’s been more than $220 million invested between our Lehigh Valley operations and Macungie where we make all of our trucks for North American export,” Walsh explained. “Investments in our engine plant in Hagerstown. Investments in PDCs on the parts side, so a lot of investments that we’re making as well to make sure this momentum we have now sustains itself moving forward.”